Confucius, a great sage and philosopher in Chinese history, is considered the “Teacher of Teachers.” Living in the chaotic Spring and Autumn period, Confucius sought to organize Chinese longstanding knowledge and experience into a coherent philosophy system. Confucianism emphasizes morality and correctness in social relationships. He traveled across the countryside to promote a more accessible and equal education system. 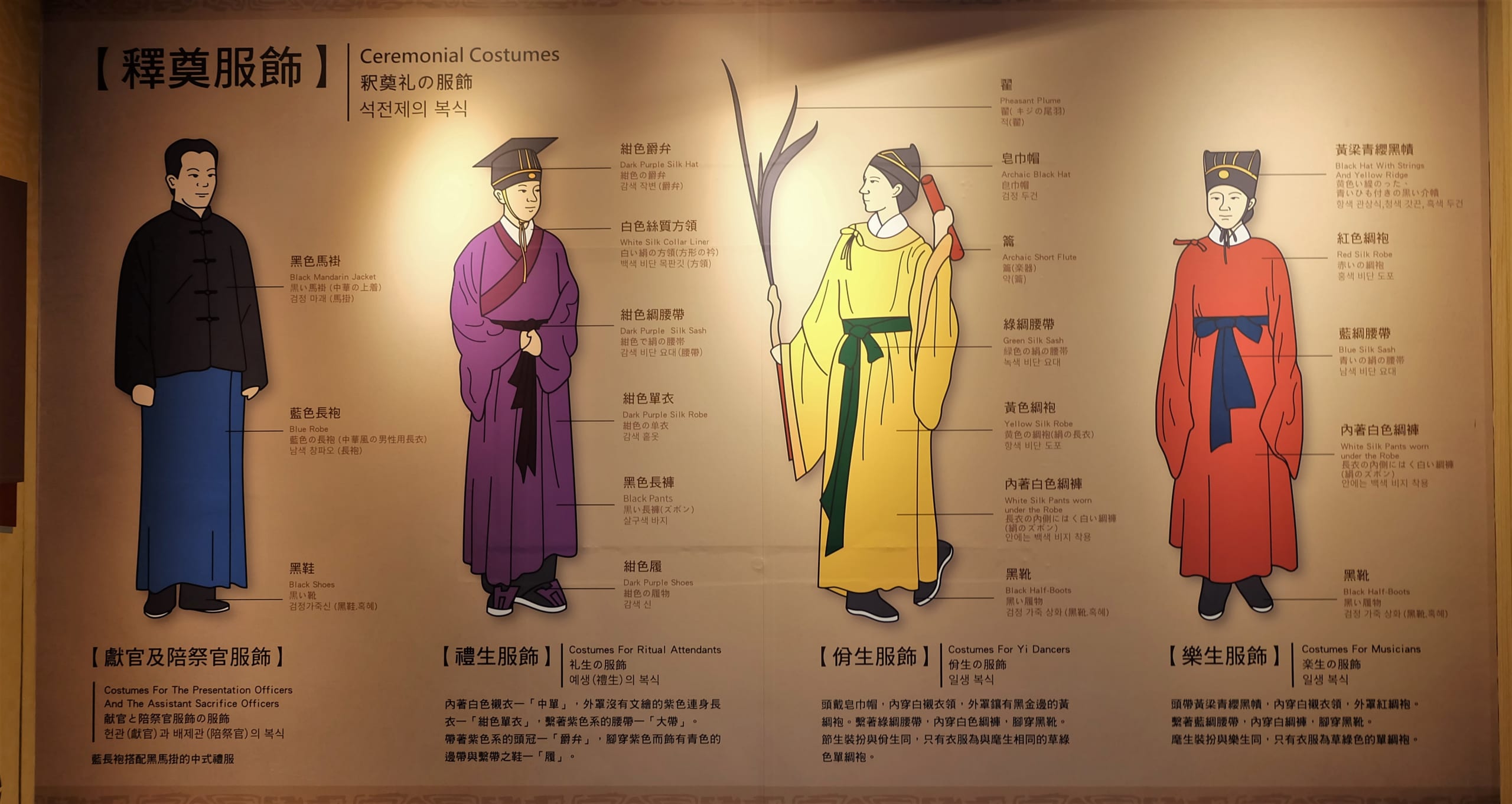 Confucius Temple is a symbol of Chinese Confucian culture. The largest and the most ancient temple is located in Shandong province, China, the birthplace of Confucius. In 1994, the temple was recognized by UNESCO as a world heritage site. This temple architecture is also duplicated from Confucius’s temples everywhere.

In Taiwan, the first Confucius temple was built in Tainan. In 1879, people in Taipei began to build Confucius Temple and completed it in 1884. From that, the temple maintained to hold a ceremony every year. The musicians were invited to Taipei to perform, and ceremonial objects were imported from Fujian.

During the Japanese colonial period, the temple was severely damaged, demolished, and it became Taipei’s first girl high school. In 1925, the Taipei gentry joined forces and asked for donations from the wealthiest people to find the location and rebuild the new Confucius Temple. They hired craftsman Wang Yi-shun, the most famous carpenter of the late Qing Dynasty, to design and build. Finally, in 1930, Chong Sheng Shrine, Yi Gate, and two small rooms on the east and west side of the main building were completed. After more than 30 years, Confucius’s birthday was celebrated in Taipei for the first time. The remains of the Confucius Temple continued to be donated and built by Taiwanese craftsmen.

After passing through Hong Gate, you will reach Li Gate and Yi Lu Path on the left and right of the main building. Their design is simple, with one door.

Wanren Gongqiang is a high wall with four characters on the outside and the image of a Chinese unicorn inside. It means that Confucius’ knowledge and morals are profound. There is no shortcut to learning. And if anyone makes an effort to get inside, he will become talented.

The Pan Pond is located behind the Wanren Gongqiang wall and has a semicircular shape. According to folklore, the Pan Pond aims to regulate heat in the summer and create good feng shui.

Lingxing Gate is in front of the Confucius Temple. A pair of coiled dragon stone pillars is in the middle of the Lingxing Gate. This Gate does not have door gods but has 108 protruding studs inside.

Yi Gate is also called Dacheng Gate because it leads to Dacheng Temple. It has two doors on the left and right. There are stone pillars without dragon carvings in the corridor. However, the walls in the corridors were inlaid with ceramic ornaments. On the roof is the image of hornless dragons encircling a censer. A Yong bell and a Jin drum are placed inside the Yi Gate and are used in the Confucius ceremony.
The East and West Side-buildings are located symmetrically on both sides of Dacheng Temple. They have lower roofs and niches representing 154 scholars and outstanding students of Confucius.

Dacheng Hall is the main hall of the Confucius temple, where the Confucius’ tablet is worshiped. Its design has a double eaves-style roof and corridors on four sides. At the ridge of the Dacheng Hall, a seven-story pagoda is in the middle, and 72 owls are on the top. According to the legend, the pagoda symbolizes the suppressing of evil.
Behind Dacheng Hall is Chongsheng Shrine, which worships the ancestors of Confucius. It has come from Chinese family morality for thousands of years. Minglun Hall is for teaching traditional Confucian classic works and ethics.
In Taiwan, Confucius’ birthday and teacher’s day are on September 28. All Confucius temples will hold a traditional ceremony to pay their respects.